April 2004. Bless Me Father, for I haved sinned. It has been about six years since I have made a confession. My last one was right before I married my husband in 1998. Father, I was not with my own father when he needed me most. During my pregnancy last year, my father learned he had advanced cancer and I spent most of my last year acting as his cheerleader, taking him to various appointments, and stayed with him for as long as I could before the delivery of my daughter. Her birth about two weeks past her due date was not easy, in fact, we had a whole team of specialists in the  delivery room when she was born and then whisked away for emergency treatment. It was scary but my beautiful daugher finally came home a week later with a list of follow up medical appointments to ensure she remained healthy.

And my dad. He had one scheduled surgery left to return to normal after his battle with cancer and this surgery took place the second week of December. I prepared meals, filled his prescriptions, and made sure he was as comfortable as possible at home after his hospital discharge because now, in my new role as a mother, I needed to leave his side to take my daughter to one of her follow up appointments. Luckily she received a clean bill of health and our family could look forward to celebrating our first Christmas together. My dad remained at his home recovering from his surgery and I called everyday to check in;  his good spirits buoyed my hopes we would all enjoy a wonderful holiday together.

On the morning of December 19, I left a message for him letting him know I was about to get on the road to make the two hour drive to his home, finish any Christmas shopping, and finalize our plans for Christmas. Yet, my efficiency ‘to get out the door and on the road’  was slowed with all the extra stuff a new mom and an infant need in those early months. Finally I endured and arrived at my father’s house in the early afternoon.

Father,  . . .. I opened the front door and found him, my father, dead on the floor. His body was cold to the touch and after talking to the funeral director and others, learned I missed his time of death by a few hours. The likely cause of death was a heart attack. If I were better organized or maybe if I could have sped up breastfeeding, I could have been there and saved him. But what was I supposed to do? I felt like God made me choose between him and my newborn daughter. I wasn’t there when he needed me most.

The priest spoke, “I hear you turning to the dark side,” and upon hearing those words I lost my religion both figuratively and literally.  The expression “losing my religion”  means ‘losing one’s temper’ or ‘at my wit’s end’ and as I sat across from him, felt blood rush to my face and a numbness pulsate through my body.  Anger. Sadness. Incredulity. How could this man of God cast such harsh judgment on a grieving child of God? I don’t remember exactly how the confession ended but I left with a vow to myself to seek a more compassionate faith.

I can’t say I have ‘lost’ my Roman Catholicism completely but I know it did not provide all the answers I need to live spiritually, particuarly in the area of parenting. I have hungered for lessons and advice concerning my challenge of parenting and have received wisdom from Episcopal priests at Easter Mass to rabbis at bat mitzvahs when they have shared their wisdom about children and parenting. By the way, don’t get me wrong about my daughters- they are good kids but possess the usual flare for testing boundaries!

Why do I share this personal story? I had the expectation that my ‘programming’ from religion would provide all the answers I needed when I needed them most. For me, that time occurred when I became an ‘orphan’ and a ‘new mom’ in a short span of time in 2003.  I was wrong- the programming failed. Instead, getting out of my comfort zone and taking a ‘leap of faith’  helped me persevere. To my friends who have recently lost someone close, I hope your programming brings you comfort and solace. If it doesn’t, keep looking. 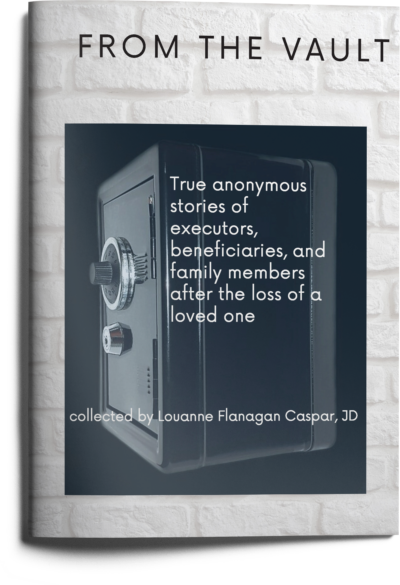 get your free copy of From the Vault- Anonymous Stories from Executors, Beneficiaries, and Family Members After the Loss of a Loved One.